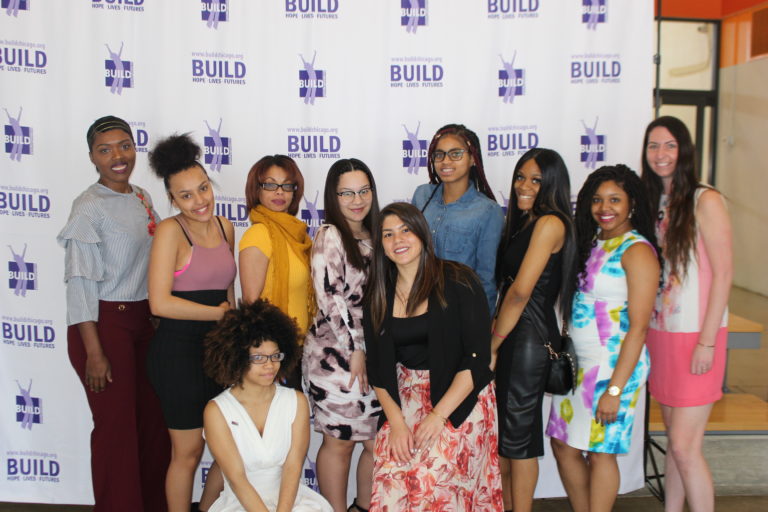 “It’s not safe like it used to be,” Keshayla said of growing up in of Chicago. “It’s like everybody’s just dying and getting killed.” At 19, she has experienced the violence first-hand, and she is not alone.

Now, Keyshayla is one of 60 pioneers in BUILDing Girls 2 Women (BG2W), a pilot launched in 2017 to focus exclusively on the highest-risk teen girls who experience the most painful trauma. BG2W combines intensive mentoring from women who have experienced the same challenges with regular counseling with trained professional therapists. A ‘sisters-only’ approach creates safety to tackle tough problems like gang involvement, sexual abuse, financial exploitation, and the physical and emotional damage of violence.

Girls are typically referred to the program through school counselors, parole officers, says Olivia Santiago, a community social worker with BUILD. “We talk about a lot of heavy things that they have experienced, and how those experiences have affected them.”

“You hear about assault, …kidnapping, …holding weapons,” Santiago explained. “Sexual harassment and sexual assault is extremely common. We hear a lot of self-blame for the experiences they’ve lived. Unaddressed self-blame can be crippling to your growth as a person.”

Group experiences teach skills like teamwork, anger management, or how to build healthy relationships, while creating a ‘Sisterhood’ support group that continues long after the core program is completed. One highlight was a formal International Women’s Day brunch that doubled as a graduation ceremony for our first Orr High School participants. Getting the girls out of their everyday school atmosphere was a valuable learning experience.

“You saw a collective of girls who didn’t talk to each other at school, who may have previously fought with each other,” Santiago said. “A lot of times they didn’t really know why they were fighting…. Seeing them helping each other pick out the outfit they felt best in was powerful. A lot of the pressure and stigma society puts on females didn’t matter, because they just helped each other, in that moment.”

While still a pilot, early results are encouraging – PTSD scores for our first cohort decreased an average of 18 points on an 80 point scale. 82% reduced school suspensions and other major discipline actions. 100% of court involved girls avoided recidivism, and every participant reported making better decisions. Participants also learned to become  their own advocates —  appearing in radio and television stories as well as a recent mini-documentary “Hear Her Voice” produced by Free Spirit Media and the Pulitzer Center.