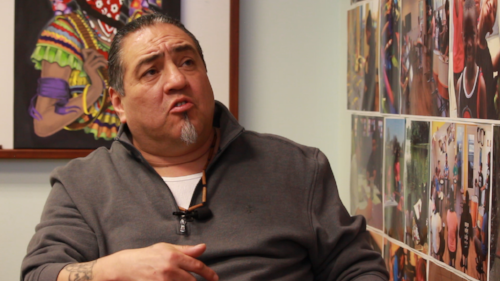 Max Cerda spent over six years at BUILD working on the streets with at-risk young people, developing relationships, building trust and mentoring them to leave the gangs and make better choices. He invested countless hours of heartfelt effort immersed in what is essentially a lifesaving mission. Now he is leaving BUILD to embark on another chapter of his remarkable life story.

Last month, Cerda was appointed by Governor J.B. Pritzker to the Illinois Department of Corrections Prisoner Review Board, serving alongside former police officers, prosecutors, judges, educators and community leaders. What is most extraordinary about this accomplishment is that he is the first ex-offender to hold this position.

It has been a difficult but rewarding journey that began in the 1970’s when Cerda, then a teenager, was involved with gangs. One night he and a close friend were ambushed – and his friend, who was like a brother, died in his arms.  This led a devastated Cerda to make a terrible decision to avenge his friend’s death, and in 1979 he landed in the prison system. Cerda was incarcerated from the age of 16 until he was 35 years old.

Upon his release, Cerda knew what he was meant to do:  help long-term offenders prepare for a meaningful life outside of prison, and mentor gang involved youth to take a different path in life –  to avoid the mistakes he made.

For the past twenty-five years, Cerda has dedicated his life to these causes. He’s conducted workshops for prisoners who are about to be released and worked for organizations performing interventions and helping families who have lost children to violence.  And then there is BUILD.

“I preach to everyone I meet about BUILD!” he says.

Even though Cerda already has many responsibilities in Springfield, he still thinks about the at-risk young people BUILD supports.

“One day I’d like to see the Intervention Team connect with parolees coming from the IDOC Juvenile Detention Center. The Team can help the youth and the young people can give back to the community.”

He adds, “the work is not just a job to me – it’s been a healing experience.”

What is the Illinois Prisoner Review Board?
​​​“The Illinois Prisoner Review Board (PRB) is a separate entity from the Illinois Department of Corrections. The PRB is an independent body whose members are appointed by the Governor of Illinois. The PRB imposes release conditions for offenders exiting penal facilities, revokes and restores good conduct credits from inmates, conducts hearings to determine whether parolees have violated conditions of parole, and awards certificates of Relief from Disabilities and Certificates of Good Conduct. The PRB notifies victims and their families when an inmate is about to be released from custody. The Board also makes confidential recommendations to the Governor relative to executive clemency petitions.” – Illinois.gov website