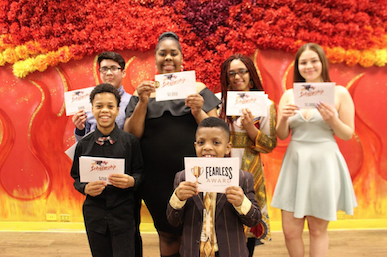 They have overcome all sorts of challenges – parents divorcing, a father going to prison, multiple moves, bad grades, trouble paying rent and problems with peers.

But that’s not what stood out on a recent Thursday night at the headquarters of BUILD, a nonprofit that works with young people in Austin and other Chicago neighborhoods.

It was the spirit, the resilience, the power of each story being told by six young people – stories that resonated with so many of the friends, family members and West Side residents who packed BUILD’s headquarters March 15th.

This is an annual event at BUILD; the public speaking contest has been held each of the last eight springs. This year’s participants – ranging in age from 16 to just 9 years old – was as memorable as all the others, perhaps more so.

“This is the most unique group we’ve had,” said Judge Pat Spratt, who spent weeks working with the students as they developed their speeches.

“We ask young people to give up some time on Saturdays and after school. They write and practice speeches about themselves – who they are, where they’re going. We ask them to be vulnerable,” Spratt said.